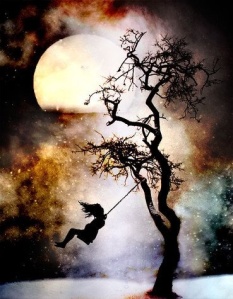 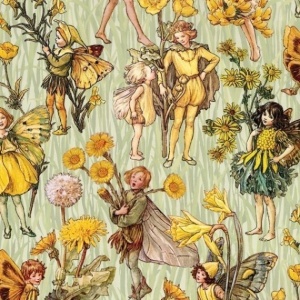 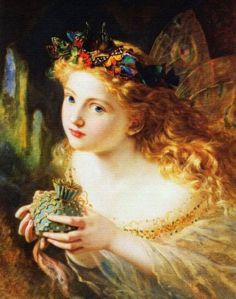 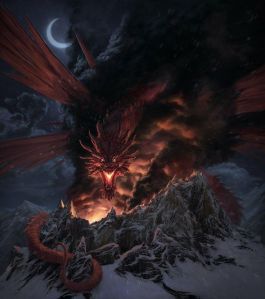 She was so relaxed, as she leaned back and went back and forth and back and forth and back and…wait!  There was no forth!  Oak went back on the swing and stayed there! Since she was in a “laid back” position anyway on the swing, she looked up and there was Sam…all 23 eyes of him…looking back at her!  “Hi, Oak! Good to see ya again! Don’t be afraid, but you’re stuck in my web.”  Sam kinda hung there, sheepishly looking back and forth, as Oak tried to get her bearings, as she wriggled around on the swing (which wasn’t easy, being hung up in the air like that).  “Sam!  What?”  “Shhhhh,” Sam suddenly grabbed her hands and pulled her off the swing, onto a giant strand of web, which went from one end of the area (she still wasn’t sure what it was) to the other.  Somehow, he literally put her on his back and wrapped a quick silk rope around her so she wouldn’t fall. and off they went, scurrying across the strand and then Sam threw (really) webs out of his hands so they could catch hold of each one and swing from one to the other, until they were up and over the gate.  Oak could barely catch her breath because Sam flew so quickly.  It really was like flying…from silken strand to the next.

Oak must have fallen asleep, because she suddenly found herself in a cave; a cave filled with webs of all colors…gold, silver, red, orange, white, black and on and on.  Rather than spiders, there were fairies!  Real fairies who were spinning the webs and placing them throughout the cave. Putting her little fists to her eyes to wipe the sleep away, Oak’s eyes opened as big as she could make them.  Yes, the webs and the fairies were still there.  “Oak!”  “Thank goodness, Sam. You’re still with me,” she said as she went to hug him.  His hugs were pretty snug because he had so many legs/arms with which to hug.  “Of course, Oak, of course I’m with you!”  With that, Sam swept her up again and they glided up on a golden strand of silk; the most beautiful golden she had ever seen.  Up up up they went until they reached what appeared to be the upper floor of the cave, which really looked like a castle.  Sam helped her down off the silken strand, and they walked toward a bright light that was shining from in front of them.  The light was glowing and bright, yet not so bright one couldn’t look into it.  It was amazing.  As they approached the light, Oak could make out the form of a woman.  There was something about this woman that seemed sweetly familiar.  But, she had a silk veil of butterflies over most of her face and Oak could only see her eyes.

The woman stepped out from the light and just stood still and gazed about her surroundings. Oak noticed that everything was quiet and that the lady was looking over Oak’s head, so Oak turned around and almost gasped with awe, for the cave was now a soft gold and white.  The little ledges up and down the walls of the cave had lovely fairies kneeling and facing this woman.  Candles and torches were lit and lined the walls and pathways; stars that looked like they came down from the heavens were hanging from above and inside the frame of each star was a fairy playing a harp.  The music from these harps was mesmerizing and dreamy.  Oak could not stop looking around for in every direction she looked was a new surprise, a new delight.  Tree frogs and lizards were dressed in light cotton robes and each had a special hat on that had tiny fireflies circling the brims of the hats.  The frogs and lizards were bringing goblets of freshly mined golden grape juice.  She knew this because she heard a baby girl fairy telling her friends.

Turning back to the woman, there was now a nest on the ground; or should I say on the “cloud”?  First, it was a nest, but a big nest – big enough for a grown up fairy.  The nest was made of beautiful twigs of cedar, birch, oak, and pine.  Blended into the twigs were stems and leaves from herbs and flowers: lavender, roses petals, sage, rosemary and some marigold.  The nest was lined with gardenia and plumeria blossoms. Now, although she thought it was on the floor, it was actually sitting upon a lavender colored cloud that had drifted down from the opening at the top of the cave.  When the woman turned to walk toward the nest, that is when Oak saw the woman had wings!  She had fairy wings! Not only did she have beautiful fairy wings, she also had hair just like Oak’s mother!  It was long and wavy and reddish yellow…such a beautiful color. The woman still had her face veil on, as she went to step into the nest. But then butterflies flew from her veil to lift her long skirt so she would not trip.  After she stepped into the nest and sat down, the butterflies then flew into the woman’s hair and became still, like beautiful hair pins.

Everyone in the cave knelt and then slowly rose.  As they rose to their feet, the woman began speaking in a soft melodic voice (Oak was thinking it sounded like her mother).  Now that she was facing everyone, it could be seen that her eyes were emerald green and soft, as soft as her voice.  “My loved ones,” she began.  Without warning, a fiery red smoke descended from the opening in the cave (at the top) and began circling the room, almost in the shape of pointing fingers; each poking at a fairy, or a lizard or a frog.  The stench was horrific!  The smoke seemed to take on the odor of a dead ogre. (Of course, Oak had never seen an ogre, much less smelled a live or dead one, but the smoke smelled like what she thought one would smell like).  The ground began to shake and the little ledges that fairies were sitting on began breaking and falling to the earth like shards of glass, trying to stab and cut as they hit the ground.  Thunder filled the chamber and was so loud that the fairies had to put their hands over their ears.  But the thunder could not disguise or extinguish what Oak heard.  It was her mother again, calling, “Oak, Oak, come home.  You’re in danger.  Come home.”

Turning to ask the fairy lady for help to get to her mother, Oak discovered she was gone!  In her place, where the nest was, sat a giant dragon, who was looking straight at Oak, as smoked poured out of his nose.  (to be continued)

This garden was created for a friend of a friend.  He is in the hospital and my friend wanted something special to take him.  The friend/patient is a Christian and so the garden is created around his faith.  Rather than a fairy, I used a little boy angel, who is riding on top of a turtle. The turtle’s name is Tommy the Turtle.  Also along for the ride is a ladybug.  Timothy the Toad is sitting upon a rock in the pond.  You’ll see the “treasure” in this garden is a silver cross.  Also, a String of Pearls is growing in the garden.

This garden is in a bonsai pot, with the land and water features.   I hope the patient loves it and I hope you do too!  xoxo 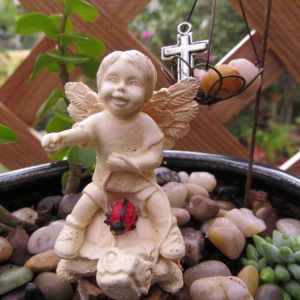 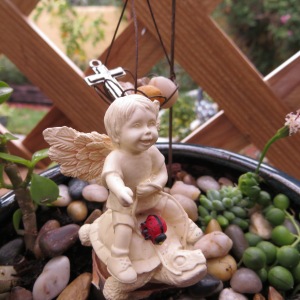 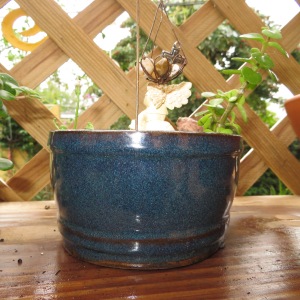 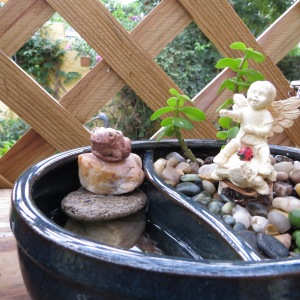 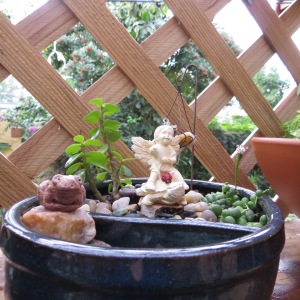 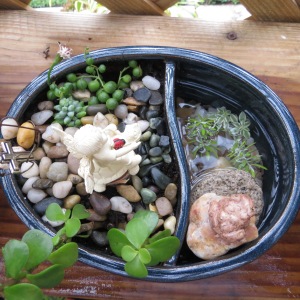 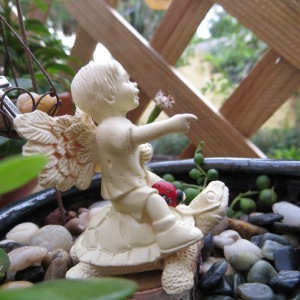 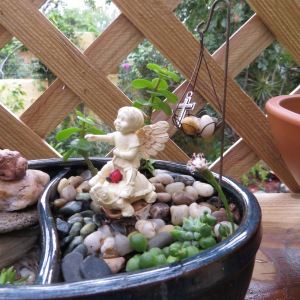 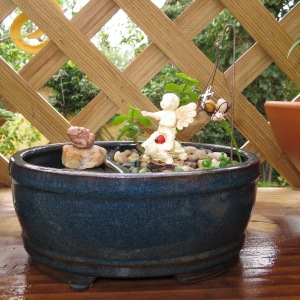 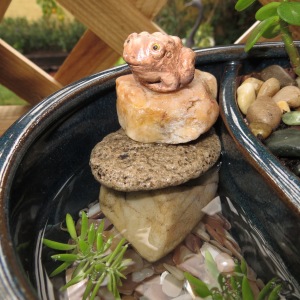 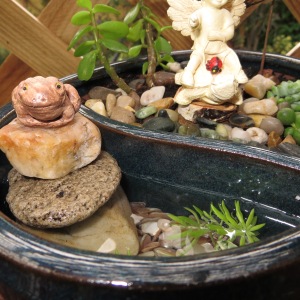 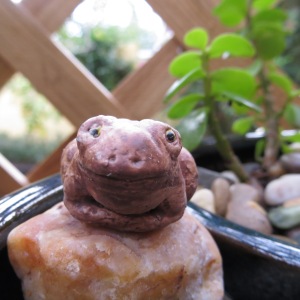 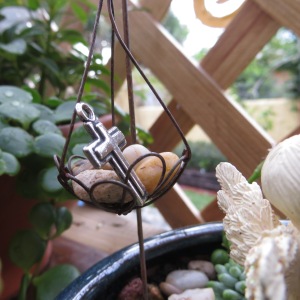 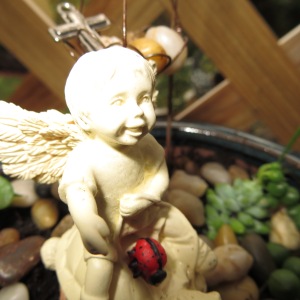